Adobe Flash Player, a well-known software program for viewing animations and movies using computer programs like a web browser, has been installed in 98% netizen's computers in a form of plugin for recent web browsers and has come to its 10th edition – Flash Player 10.1, this year in June, 2010.

Moyea SWF Converter, an all-inclusive SWF to video converter made for both amateurs and professionals, proudly announces the enhanced support to Flash Player 10.1 in its latest version, which absolutely makes it easier for customers to handle the source invisible Flash files with extremely low frame rate and get a perfect output with higher video playback fidelity and better animation effect.

Part I. The New and Enhanced Features of Flash Player 10.1

Flash Player 10.1 published with creative new features including filters & effects, text, native device interactions, support for multitouch, gestures, mobile input models, accelerometer input and periodic timer, etc. Among them all, the introduction of periodic timer is the most innovative and significant one.

It works by eliminating the dependency on different browser timer implementations to deliver consistent cross-platform behavior, significantly lower CPU utilization with nonvisible SWF content, and extend battery life. Nonvisible SWFs and SWFs on hidden tabs are throttled down to 2 frames per second. Frame rates of visible SWFs, timers, and local connections are limited and aligned to the player's periodic timer. Video can play back at any frame rate, increasing video playback fidelity.

This new feature functions as a double-edged sword which, on one hand, can lower CPU utilization and save battery life, on the other, it may cause troubles for some SWF converters to capture the flash content under such extremely low frame rate.

The fact that most SWF converters on the market now are only with cripple support to Flash Player 10 or even earlier versions, may be a big frustration for whom want to enjoy the dynamic flash on other media devices. During the capturing and converting process, if the current window is accidently covered by others or minimized, the frame rate will drop to 2-8frm/s dramatically due to one of the new features of Flash Player 10.1 - periodic timer, which is mentioned previously and aims to maintain a relatively higher fidelity.

What will happen if the frame rate drops from 30frm/s(for example) to 2-8frm/s? Definitely the program takes much longer time to capture the source SWF and generates much bigger output video with intermittent animations.

However, things can be different with Moyea SWF Converter thanks to the perfect support to Flash Player 10.1 and the unique Lower-Playback-Speed technology. They make it possible to capture the source SWF with original frame rate 30frm/s even if the window is covered, but just with lower playback speed intentionally made to capture every single detail under this circumstance.

The figure below illustrates the capability of Moyea SWF Converter to capture SWF content with the original frame rate 30frm/s, and with the fact that the window is covered. This can be shown with the numbers indicated in red, it jumps as almost the same rate before and after the main SWF capture window is covered. 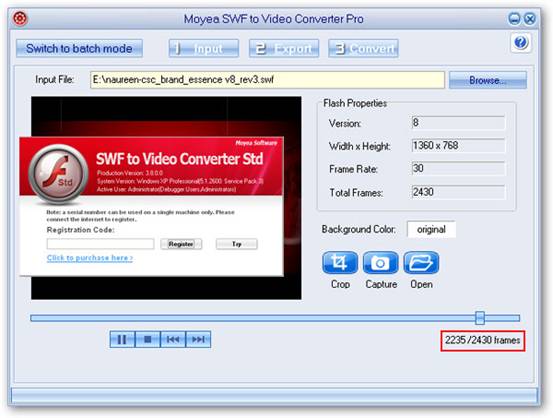 Supporting Flash Player 10.1 is just one of the great features that shall guarantee a perfect output with exact video and audio synchronization. Actually there are more! 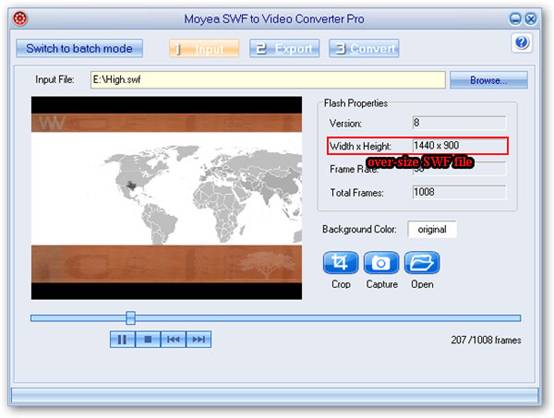 2. Conversion Mode –"Manual" and "Automatic" are available to choose. The former is for better effect and more customized output; while the latter is used in batch-convert mode in default. 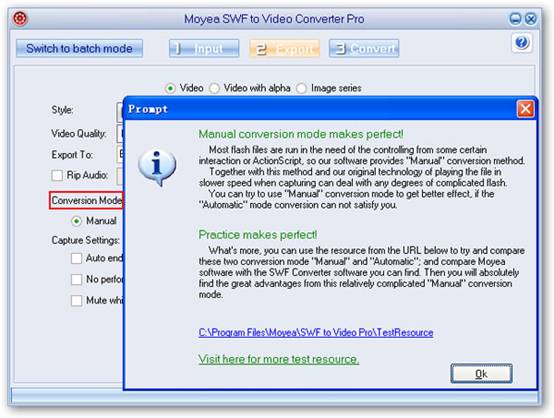 3. Performance Testing – prior to the final SWF conversion, a performance testing will be executed, with the suggested duration value to get an accurate result. 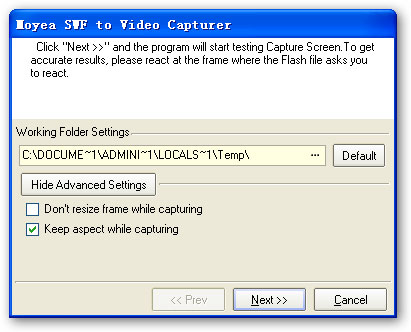 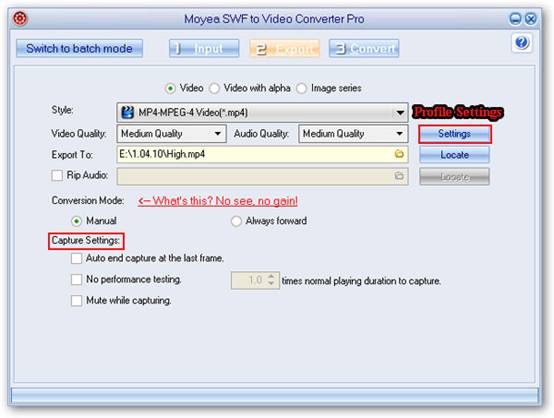